A new book by Christina Papagiannouli,

Political Cyberformance: The Etheatre Project, examines the use of internet platforms as theatrical, rehearsal and performance spaces and explores the interactive and political potentials of online theatre, questioning the boundaries of these in-between spaces and the spatial experiences they engender. It is published by Palgrave McMillian and can be ordered here.

Christina was one of the organisers of the CyPosium in 2012, and with her Etheatre project has been involved in UpStage for many years. She and her collaborators presented cyberformances at the 11:11:11 and 121212 festivals, and at the UpStage 10th Birthday in 2014. She has participated in We have a situation! and Water-wheel Tap, and is currently part of the team developing a funding proposal for the next-generation cyberformance platform.

Launch of “CyPosium – the book” 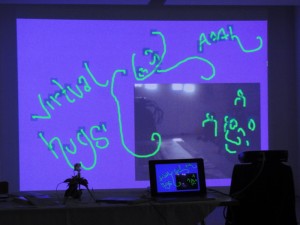 CyPosium – the book was launched on 12 December with an event in Munich and online. Book contributors and organisers of the CyPosium read excerpts from their various locations around the world. A recording of the performance is below, and you can read the text here.

The event took place at 20:00 CET, online and at PLATFORM, Munich, following a guided tour by Gretta Louw of the exhibition Net Work. It was also part of the programme of Artes Virtuais Interactivas Participativas 2º, in Lisbon, Portugal.

On 12 October 2012, a cyberformance symposium will be hosted by UpStage, the Waterwheel Tap and independent cyberformers, where cyberformers will discuss their online performances with other artists, researchers and interested participants. Questions we would like to tackle in CyPosium include: What different kind of events happened? What did they make possible? What was special about the event? Why were things done in a certain way and what were the results?

Published by Link Editions and La Panacée, CyPosium - the book is a collection of material from the CyPosium. Presentations, chat and discussion excerpts, illustrations and more, contributed by international artists and CyPosium participants.

The book is available as a free pdf or full colour hard copy.

Presentation performances: you can view a recording of the launch cyberformance, and the Transmediale performance here.

Read blog posts about the CyPosium by Rob Myers and Alberto Vazquez; and check out the "Live Cyberformance Manifesto" rewriting performance which happened on 26 March.